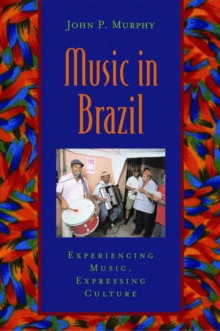 Music in Brazil is one of several case-study volumes that can be used along with Thinking Musically, the core book in the Global Music Series.

Thinking Musically incorporates music from many diverse cultures and establishes the framework for exploring the practice of music around the world.

It sets the stage for an array of case-study volumes, each of which focuses on a single area of the world.

Each case study uses the contemporary musical situation as a point of departure, covering historical information and traditions as they relate to the present.

Visit www.oup.com/us/globalmusic for a list of case studies in the Global Music Series.

The website also includes instructional materials to accompany each study.

As the largest nation in Latin America, Brazil is home to some of the most celebrated music in the world.

Music in Brazil covers a wide spectrum of this music, including samba, bossa nova, Tropicalia, and MPB (Musica Popular Brasileira); regional traditional and popular music; Brazilian rock, rap, and electronica; and such genres as sertaneja (similar to country-and-western music) and brega (sentimental pop).Music in Brazil is organized the themes of unity, diversity, cosmopolitanism, and verbal artistry. It shows how Brazilian music expresses the unity of the country's culture, discussing, for example, how samba plays a major part in annual Carnaval celebrations and provides a focus for nationalist sentiment.

In contrast, the book also demonstrates how music represents the diversity of Brazilian culture, describing how each of Brazil's regions is home to unique genres of music, and how the audiences for various types of music reflect class distinctions.

In addition, author John P. Murphy presents examples of cosmopolitan Brazilian music and emphasizes the connections between music and other aspects of Brazilian culture, especially language and gender.

Enhanced by vivid illustrations and guided listening activities, this book is a captivating introduction to the music of Brazil.

It is packaged with a 60-minute audio CD containing examples of the music discussed in the book, many of which are taken from the author's field recordings.