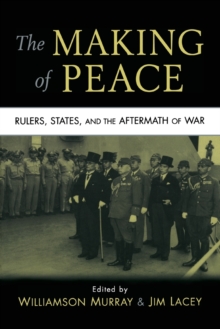 The making of peace : rulers, states, and the aftermath of war

The Making of Peace represents a fascinating contribution to the study of war: namely, the difficulties that statesmen have confronted in attempting to put back together the pieces after a major conflict.

These essays examine how Western belligerents have addressed - or failed to address - the making of peace across a span of two and a half millennia and in contests reflecting a broad range of prompting disputes.

Some efforts produced at best a momentary suspension of hostilities.

Others transformed the very context of international relations.

Defined more modestly, however, as the control and moderation of violence, some peacemaking efforts were notably more successful than others.

This study also serves as a first draft of a guide for those who will confront the equally difficult task of maintaining the peace, once achieved.

It contains path-breaking essays by leading historians of the United States and the United Kingdom.