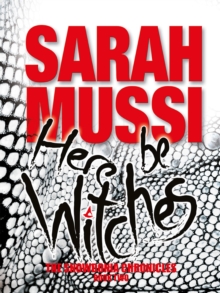 Here be Witches is the second book in the Snowdonia Chronicles trilogy by Sarah Mussi.

A perilous adventure into the magical and murderous realm of mythical Snowdonia.All Ellie Morgan wants is to be with her one true love, Henry.

But she's caught in the middle of a BATTLE as old as SNOWDON itself.

A battle between GOOD and EVIL.A WITCHES' SPELL, cast high on the mountain, has sped up time and made matters MUCH WORSE.

The dragons are awake; mythical creatures and evil ghosts have risen. And nearly all of them want Ellie DEAD.Thank heavens for loyal friend George, disloyal bestie Rhi, and mysterious stranger, Davey.

Armed with Granny Jones's potions, Ellie and her companions must set out on a journey to REVERSE THE SPELL, stop the EVIL White Dragon and find Henry.As an eternal winter tightens its grip on Snowdon, Ellie and her friends have just THREE DAYS to SURVIVE and complete their quest.