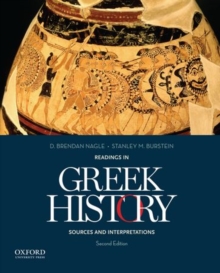 It provides selections drawn from historical, philosophical, and oratorical Greek literary texts and from documentary sources, including inscriptions and papyri.

The book is organized chronologically but alsoaddresses various themes throughout, including religion, war, and gender relations.

It is enhanced by substantial introductions to each chapter and selection and more than thirty photographs, images, and maps.

NEW TO THIS EDITION:* New readings on the Bronze Age, religion in the Archaic and Classical periods, Athenian democracy, and Roman relations with the Greeks* An improved design featuring expanded headnotes and source documentation* A revised illustration program and new maps* A new Introduction and a new Timeline