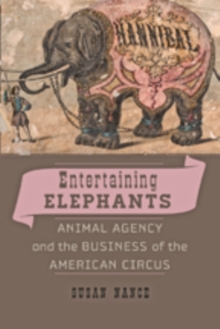 Entertaining Elephants : Animal Agency and the Business of the American Circus

Consider the career of an enduring if controversial icon of American entertainment: the genial circus elephant.

In Entertaining Elephants Susan Nance examines elephant behavior-drawing on the scientific literature of animal cognition, learning, and communications-to offer a study of elephants as actors (rather than objects) in American circus entertainment between 1800 and 1940.

By developing a deeper understanding of animal behavior, Nance asserts, we can more fully explain the common history of all species. Entertaining Elephants is the first account that uses research on animal welfare, health, and cognition to interpret the historical record, examining how both circus people and elephants struggled behind the scenes to meet the profit necessities of the entertainment business.

The book does not claim that elephants understood, endorsed, or resisted the world of show business as a human cultural or business practice, but it does speak of elephants rejecting the conditions of their experience.

They lived in a kind of parallel reality in the circus, one that was defined by their interactions with people, other elephants, horses, bull hooks, hay, and the weather.

Nance's study informs and complicates contemporary debates over human interactions with animals in entertainment and beyond, questioning the idea of human control over animals and people's claims to speak for them.

As sentient beings, these elephants exercised agency, but they had no way of understanding the human cultures that created their captivity, and they obviously had no claim on (human) social and political power.