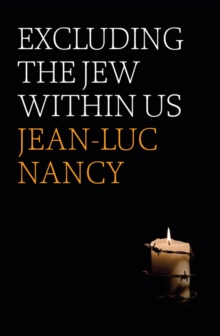 Excluding the Jew Within Us

By: Nancy, Jean-Luc,  Clift, Sarah(Translated by)

Why does anti-Semitism seem to be so deeply engrained in our societies, our institutions and our attitudes?

To answer this question we need to look beyond our current practices and see that anti-Semitism has much deeper roots - that it is woven into the very structures of Western thought. Jean-Luc Nancy argues that anti-Semitism emerged from the conflictual conjunction of two responses to the eclipse of archaic cultures.

The Greek and the Jewish responses both affirmed a humanity freed from myth but put forward two very different conceptions of autonomy: on the one hand, the infinite autonomy of knowledge, of logos, and on the other, the paradoxical autonomy of a heteronomy guided by a hidden god.

How could the long and terrible history of the hatred of the Jew, masking a self-loathing, be generated by these intrinsically contradictory beginnings?

That is the question to which this short book gives a compelling answer.