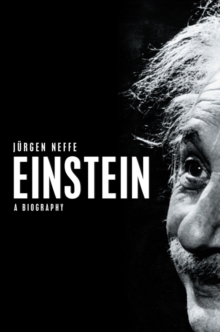 By: Neffe, Jurgen,  Frisch, Shelly(Translated by)

Albert Einstein is an icon of the twentieth century.

Born in Ulm, Germany, in 1879, he is most famous for his theory of relativity, which is considered the founding principle of modern physics.

He also made enormous contributions to quantum mechanics and cosmology, and for his work he was awarded the Nobel Prize in 1921.

A self-pronounced pacifist, humanist, and, late in his life, democratic socialist, Einstein was also deeply concerned with the social impact of his discoveries.

Much of Einstein's life is shrouded in legend. From popular images and advertisements to various works of theater and fiction, he has come to signify so many things: the quintessential absent-minded professor; the gentle eccentric; the pacifist; the super-human genius.

In Einstein: A Biography, Jurgen Neffe presents a clear and probing portrait of the man behind the myth.

He recounts Einstein's life with detail and accuracy, presenting a comprehensive account of the educational, religious, psychological and historical conditions that enabled Einstein to become the ber-physicist of all time. Unearthing new documents, including a series of previously unknown letters from Einstein to his sons, which shed a new light on his role as a father, Neffe also paints a rich portrait of the tumultuous years in which Einstein lived and worked. With a background in the sciences, Neffe describes and contextualizes Einstein's enormous contributions to our scientific legacy.

He leads his readers through today's institutes and laboratories worldwide, where Einstein's work continues to thrill researchers and scholars.

A bestseller in Germany, Einstein is sure to be a classic biography of the man and proverbial genius who has been called the brain of the [twentieth] century.