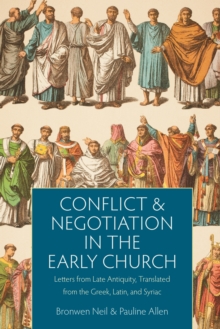 Conflict and Negotiation in the Early Church : Letters from Late Antiquity, Translated from the Greek, Latin, and Syriac

Recent decades have seen great progress made in scholarship towards understanding the major civic role played by bishops of the eastern and western churches of Late Antiquity.

Brownen Neil and Pauline Allen explore and evaluate one aspect of this civic role, the negotiation of religious conflict. Conflict and Negotiation in the Early Church focuses on the period 500 to 700 CE, one of the least documented periods in the history of the church, but also one of the most formative, whose conflicts resonate still in contemporary Christian communities, especially in the Middle East. To uncover the hidden history of this period and its theological controversies, Neil and Allen have tapped a little known written source, the letters that were exchanged by bishops, emperors and other civic leaders of the sixth and seventh centuries.

This was an era of crisis for the Byzantine empire, at war first with Persia, and then with the Arab forces united under the new faith of Islam.

Official letters were used by the churches of Rome and Constantinople to pursue and defend their claims to universal and local authority, a constant source of conflict.

As well as the east-west struggle, Christological disagreements with the Syrian church demanded increasing attention from the episcopal and imperial rulers in Constantinople, even as Rome set itself adrift and looked to the West for new allies. From this troubled period, 1500 letters survive in Greek, Latin, and Syriac.

With translations of a number of these, many rendered into English for the first time, Conflict and Negotiation in the Early Church examines the ways in which diplomatic relations between churches were developed, and in some cases hindered or even permanently ruptured, through letter-exchange at the end of Late Antiquity.