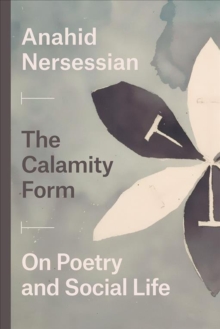 The Calamity Form : On Poetry and Social Life

Romanticism coincided with two major historical developments: the Industrial Revolution, and with it, a turning point in our relationship to the earth, its inhabitants, and its climate.

Drawing on Marxism and philosophy of science, The Calamity Form shines new light on Romantic poetry, identifying a number of rhetorical tropes used by writers to underscore their very failure to make sense of our move to industrialization. Anahid Nersessian explores works by Friedrich Hoelderlin, William Wordsworth, John Keats, and others to argue that as the human and ecological costs of industry became clear, Romantic poetry adopted formal strategies--among them parataxis, the setting of elements side by side in a manner suggestive of postindustrial dissonance, and apostrophe, here an address to an absent or vanishing natural environment--as it tried and failed to narrate the calamities of capitalism.

These tropes reflect how Romantic authors took their bewilderment and turned it into a poetics: a theory of writing, reading, and understanding poetry as an eminently critical act.

Throughout, Nersessian pushes back against recent attempts to see literature as a source of information on par with historical or scientific data, arguing instead for an irreducibility of poetic knowledge.

Revealing the ways in which these Romantic works are of their time but not about it, The Calamity Form ultimately exposes the nature of poetry's relationship to capital--and capital's ability to hide how it works.