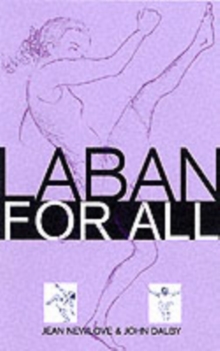 Rudolf Laban is a theorist and practitioner of movement.

He laid down a system for analyzing - and annotating - the way the human being moves in space.

He ascribed values to these movements, releasing the expressive power contained within each one of them.

This is a basic "how-to" manual on the Laban system of movement.

It offers a simplified version of his system which can be used by relative beginners upwards.

We are introduced to the "Kinesphere" - which simply means the personal space surrounding each one us extending as far as we can reach.

It discusses the "Dimensional Cross" - which is a way of describing movement in three dimensions: high/low, forwards/backwards and side to side.

Each new term is accompanied by very specific illustrated exercises, designed to strengthen and deepen our understanding.

When we have grasped - and practised - the basic vocabulary, we move on to its expressive possibilities in drama and dance.