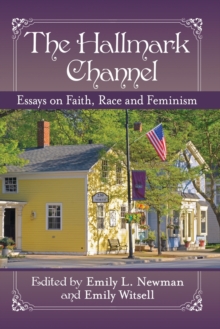 The Hallmark Channel : Essays on Faith, Race and Feminism

Originally known as a brand for greeting cards, Hallmark has seen a surge in popularity since the early 2010s for its made-for-TV movies and television channels: the Hallmark Channel and its spinoffs, Hallmark Movie Channel (now Hallmark Movies & Mysteries) and Hallmark Drama.

By creating reliable and consistent content, Hallmark, and by extension their owner Crown Media Family Values, offer people a calming retreat from the real world. This collection of essays strives to fill the void in academic attention surrounding Hallmark as there have been no significant scholarly articles or book-length studies on it.

From the plethora of Christmas movies that are released each year to the successful faith-based scripted programming and popular cozy mysteries that air every week, there is a wealth of material to be explored.

Specifically, this book explores the network's problematic relationship with race, the dominance of Christianity and heteronormativity, the significance placed on nostalgia, and the hiring and re-hiring of a group of women who thrived as child stars.