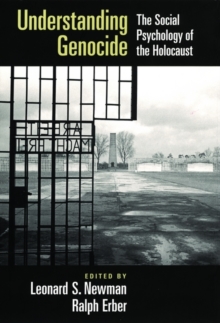 Understanding genocide : the social psychology of the Holocaust

When and why do groups target each other for extermination?

How do seemingly normal people become participants in genocide?

Why do some individuals come to the rescue of members of targeted groups, while others just passively observe their victimization? And how do perpetrators and bystanders later come to terms with the choices that they made?

These questions have long vexed scholars and laypeople alike, and they have not decreased in urgency as we enter the twenty-first century.

In this book-the first collection of essays representing social psychological perspectives on genocide and the Holocaust- prominent social psychologists use the principles derived from contemporary research in their field to try to shed light on the behavior of the perpetrators of genocide.

The primary focus of this volume is on the Holocaust, but the conclusions reached have relevance for attempts to understand any episode of mass killing.Among the topics covered are how crises and dificult life conditions might set the stage for violent intergroup conflict; why some groups are more likely than others to be selected as scapegoats; how certain cultural values and beliefs could facilitate the initiation of genocide; the roles of conformity and obedience to authority in shaping behavior; how engaging in violent behavior makes it easier to for one to aggress again; the evidence for a "genocide-prone" personality; and how perpetrators deceive themselves about what they have done.

The book does not culminate in a grand theory of intergroup violence; instead, it seeks to provide the reader with new ways of making sense of the horrors of genocide.

In other words, the goal of all of the contributors is to provide us with at least some of the knowledge that we will need to anticipate and prevent future such tragic episodes.