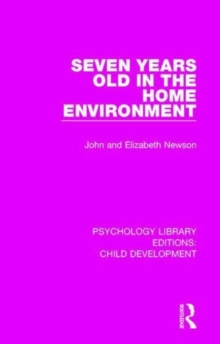 John and Elizabeth Newson's long-term investigation of child up-bringing attracted intense interest from its earliest beginnings: 'pathbreaking' and 'seminal' were adjectives that greeted their first report.

The study is now established as one of the major projects of the seventies. This third volume of the series catches some seven hundred Nottingham children at a critical stage of their development: in transition from infant to junior school, they are moving out of the protective family orbit and into the wider social world of street, playground and classroom, where cultural pressures make themselves felt in ever more demanding ways. Like the Newson's earlier books, this study has a strong ecological flavour in the sense that what children do, what parents do, and how they feel about what they do, are all set firmly into the broader context of life as it is lived in contemporary urban society.

This is no laboratory investigation. Yet a sensitive and subtle methodology has allowed the Newsons to present an impressive structure of hard factual data, while putting flesh on the statistical bones by constant reference to the mothers' own thoughts and reactions, faithfully recorded in their own vivid words. The result is a rich descriptive picture of seven-year-olds and their family life: their play, friendships, quarrels; their duties and privileges; their fears, fantasies and jokes.

Inevitably, much of the book explores the dynamics of conflict between mother and child, and takes a long hard look at the domestic power-game as it is expressed in both words and punishment.

At the same time, the loving and caring side of the relationship is closely and delicately examined with a rare empathy for both parent and child.

In short, this is a study in depth and in breadth of how parents and children bring each other up. Teachers, doctors, nurses and social workers, as well as parents welcomed the Newsons' earlier reports.

Once again, no professional worker in the field of childhood or parenthood can afford to be without the insights offered by this volume, which is also a rich source of enjoyment for any observer, professional or amateur, of the family in society today.

Today it can be enjoyed in its historical context.