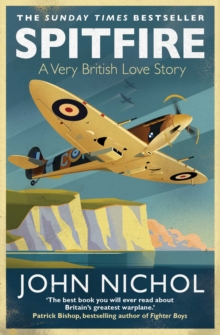 THE SUNDAY TIMES NON FICTION BESTSELLER WHSmith NON-FICTION BOOK OF THE YEAR 2018'The best book you will ever read about Britain's greatest warplane' Patrick Bishop, bestselling author of Fighter Boys'A rich and heartfelt tribute to this most iconic British machine' Rowland White, bestselling author of Vulcan 607 'As the RAF marks its centenary, Nichol has created a thrilling and often moving tribute to some of its greatest heroes' Mail on Sunday magazine The iconic Spitfire found fame during the darkest early days of World War II.

But what happened to the redoubtable fighter and its crews beyond the Battle of Britain, and why is it still so loved today?

With the British Isles in easy reach since the fall of France, Adolf Hitler was convinced that Great Britain would be defeated in the skies over her southern coast, confident his Messerschmitts and Heinkels would outclass anything the Royal Air Force threw at them.

What Hitler hadn't planned for was the agility and resilience of a marvel of British engineering that would quickly pass into legend - the Spitfire. Bestselling author John Nichol's passionate portrait of this magnificent fighter aircraft, its many innovations and updates, and the people who flew and loved them, carries the reader beyond the dogfights over Kent and Sussex.

Spanning the full global reach of the Spitfire's deployment during WWII, from Malta to North Africa and the Far East, then over the D-Day beaches, it is always accessible, effortlessly entertaining and full of extraordinary spirit. Here are edge-of-the-seat stories and heart-stopping first-hand accounts of battling pilots forced to bail out over occupied territory; of sacrifice and wartime love; of aristocratic female flyers, and of the mechanics who braved the Nazi onslaught to keep the aircraft in battle-ready condition.

Nichol takes the reader on a hair-raising, nail-biting and moving wartime history of the iconic Spitfire populated by a cast of redoubtable, heroic characters that make you want to stand up and cheer.