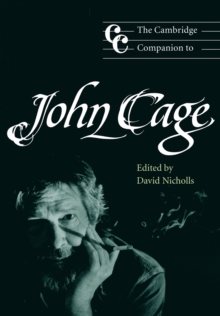 The Cambridge companion to John Cage

Part of the Cambridge Companions to Music series

John Cage (1912-1992) was without doubt one of the most important and influential figures in twentieth-century music.

Pupil of Schoenberg, Henry Cowell, Marcel Duchamp, and Daisetz Teitaro Suzuki, among others, he spent much of his career in pursuit of an unusual goal: 'giving up control so that sounds can be sounds', as he put it.

This book celebrates the richness and diversity of Cage's achievements - the development of the prepared piano and of the percussion orchestra, the adoption of chance and of indeterminacy, the employment of electronic resources and of graphic notation, and the questioning of the most fundamental tenets of Western art music.

Besides composing around 300 works, he was also a prolific performer, writer, poet, and visual artist.

Written by a team of experts, this Companion discusses Cage's background, his work, and its performance and reception, providing in sum a fully rounded portrait of a fascinating figure.