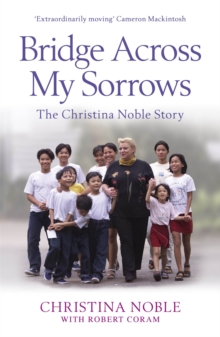 Bridge across my sorrows : the Christina Noble story

Christina Noble's story is one of bravery and resilience in the face of deprivation and abuse on a scale that most would find unimaginable.

Her childhood in the Dublin slums barely merits the name: after the early death of her mother, her family was split apart, her alcoholic father unable to care for his children.

Christina was sexually abused and later escaped from an orphanage to live in poverty on the streets of Dublin.

Whilst in an abusive marriage, in a dream she found the will to fight.

Christina's hope lay in a determination to work among the bui doi, the street children of Vietnam, and this was the starting point for the most extraordinary part of her story.

Within two years of arriving in Ho Chi Minh City she had opened a medical and social centre and achieved worldwide fame.

Outspoken, often angry, yet profoundly moving, Bridge Across my Sorrows is one of the most inspirational stories ever told.