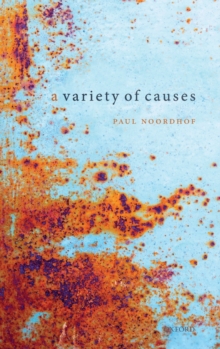 A Variety of Causes

By: Noordhof, Paul (University of York)

This is the first book length defence of a counterfactual theory of causation.

The analysis defended is new. It expresses the idea that, independent of its competitors, a cause raises the chance of an effect over its mean background chance by a complete causal chain.

The analysis depends upon a novel development of David Lewis's Theory of Counterfactuals.

One consequence of the analysis is that causation is not transitive.

Causation is also nonsymmetric. Thecounterfactual basis of causal nonsymmetry is the result of a number of different, and sometimes interacting, nonsymmetries.

The analysis allows for the development of a novel theory of events whose nature is independent of their role in causation and the identification of one other important causalrelationship: property causation.

Although compatible with Hume's denial of necessary connections between distinct existences, a key feature of the theory is that it benefits from being independent of the Humean framework.

There are two ways in which something may be metaphysically fundamental: vertically and horizontally.

Many metaphysicians emphasise vertical fundamentality and focus on truth making. The book rejects this emphasis and the truth making approach in particular.

Horizontallyfundamental metaphysical entities are those that are necessary components in different possible universes.

Causation has a claim to be horizontally fundamental: the cement of any universe.

Laws are patterns of causation realised in different metaphysical frameworks such as those articulated by Lewis,Armstrong and the powers ontologists.

The book recognises varieties of causation both in, for example, counting cases of double prevention and causation by genuine processes as types of causation, and allowing that the analysis identifies causes across these different metaphysical frameworks.