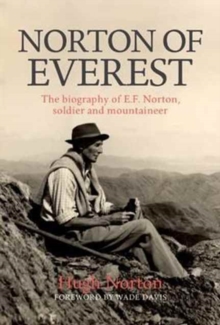 Norton of Everest : the biography of E.F. Norton, soldier and mountaineer

By: Norton, Hugh,  Davis, Wade(Foreword by)

Major Norton gave the order to fire two or threetimes ...

Their advanced machine gunners could be seen rushing forward andestablishing themselves in commanding posts ...

Almost at once the ridge we wereoccupying was swept by machine gun fire ...

E.F. Norton lived a life of distinction in the declining years of theBritish Empire.

Born into an accomplished,well-travelled family, he followed his heart and enlisted for a professionalcareer as a soldier.

A distinguished military career followed, punctuated withindulgences in his passion for exploration and mountaineering.

The BritishEmpire was starting to crumble, and Norton would be called upon more than onceto rise to a variety of challenges.

Norton's gift for leadership was first demonstratedvia his rapid progression through the ranks in the First World War, which pavedthe way for future leadership appointments, having earned the confidence andrespect of those under his command.

Events in the Second World War followedsuit, when Norton was abruptly assigned the post of acting governor of HongKong, entrusted to save the civilian population from imminent Japanese invasion. The 1924 Everest expedition also exemplifies thepattern of having had leadership thrust upon him - in this case when GeneralCharles Bruce was struck down by malaria on the approach march.

Leading fromthe front, Norton set an altitude record for climbing on Everest withoutsupplementary oxygen - a record only bettered in 1978 when Reinhold Messner andPeter Habeler made the first ascent of Everest without oxygen.

Yet tragedywould follow Norton's achievement, when George Mallory and Andrew Irvinedisappeared high on the mountain. In Norton of Everest, Hugh Norton has written sensitively andknowledgably about his father's remarkable life as mountaineer, soldier,naturalist, artist and family man.

As on Everest, the real story is not onlythe death of the gallant, but also the heroics of the quiet survivors like E.F. Norton.