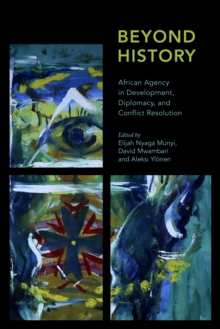 Beyond history : African agency in development, diplomacy and conflict resolution

Part of the Africa: Past, Present & Prospects series

Moving beyond a self-indulgent attitude about Africa's historical victimhood, the book seeks to capture how African states individually and Africa's collective institutions (the AU) are providing agency in Africa's international relations.

While African states have been trailblazers in such ideas as 'The Responsibility to Protect', as conceived in the African Union Constitutive Act (2001) which preceded the United Nations (UN) Secretary General's report "In Larger Freedom" (2005) in which the UN adopted the concept, African agency in international relations has not always been captured proactively.

Our volume seeks to document Africa (and African states) in a state of proactivity as opposed to a reactionary mode of international relations which has for long been the case due to the discipline's heavy concentration on the West. The main themes we include are: African agency in international relations and commerce, agency in Africa's balancing of big and regional powers, reshaping Africa-EU relations beyond the Cotonou Agreements, Africa and international human rights institutions, African efforts in elections and conflicts in Africa and relationship building among African leaders.