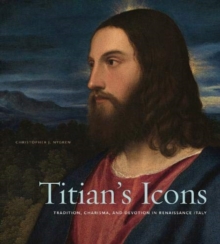 Titian, one of the most successful painters of the Italian Renaissance, was credited by his contemporaries with painting a miracle-working image, the San Rocco Christ Carrying the Cross.

Taking this unusual circumstance as a point of departure, Christopher J.

Nygren revisits the scope and impact of Titian's life's work.

Nygren shows how, motivated by his status as the creator of a miracle-working object, Titian played an active and essential role in reorienting the long tradition of Christian icons over the course of the sixteenth century. Drawing attention to Titian's unique status as a painter whose work was viewed as a conduit of divine grace, Nygren shows clearly how the artist appropriated, deployed, and reconfigured Christian icon painting.

Specifically, he tracks how Titian continually readjusted his art to fit the shifting contours of religious and political reformations, and how these changes shaped Titian's conception of what made a devotionally efficacious image.

The strategies that were successful in, say, 1516 were discarded by the 1540s, when his approach to icon painting underwent a radical revision.

Therefore, this book not only tracks the career of one of the most important artists in the tradition of Western painting but also brings to light new information about how divergent agendas of religious, political, and artistic reform interacted over the long arc of the sixteenth century. Original and erudite, this book represents an important reassessment of Titan's approach to devotional subject matter.

It will appeal to students and specialists as well as art aficionados interested in Titian and in religious painting.