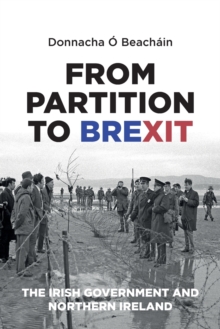 From partition to Brexit : the Irish government and Northern Ireland

By: O Beachain, Donnacha (Associate Professor of Politics and Director of Research at the School of Law and Government Dublin City University)

From Partition to Brexit is the first book to chart the political and ideological evolution of Irish government policy towards Northern Ireland from the partition of the country in 1921 to the present day.

Based on extensive original research, this groundbreaking and timely study challenges the idea that Irish governments have pursued a consistent set of objectives and policies towards Northern Ireland to reveal a dynamic story of changing priorities.

The book demonstrates how in its relations with the British Government, Dublin has been transformed from spurned supplicant to vital partner in determining Northern Ireland's future, a partnership jeopardised by Britain's decision to leave the European Union.

Informed, robust and innovative, From Partition to Brexit is essential reading for anyone interested in Irish or British history and politics, and will appeal to students of diplomacy, international relations and conflict studies. -- .