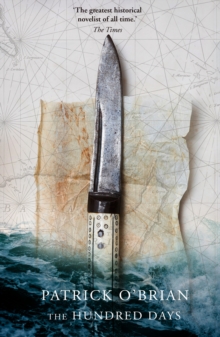 'If we had only two or three of O'Brian's Aubrey/Maturin series, we would count ourselves lucky; with six or seven the author would be safely among the greats of historical fiction.

But this is his nineteenth volume!' WILLIAM WALDEGRAVE, Literary Review Following the extraordinary success of The Yellow Admiral, this latest Aubrey-Maturin novel brings alive the sights and sounds of North Africa as well as the great naval battles in the days immediately following Napoleon's escape from Elba.

Aubrey and Maturin are in the thick of the plots and counterplots to prevent his regaining power.

Coloured by conspiracies in the Adriatic, in the Berber and Arab lands of the southern shores of the Mediterranean, by night actions, fierce pursuits, slave-trading and lion hunts, The Hundred Days is a masterpiece.'O'Brian is far and away the best of the Napoleonic storytellers and The Hundred Days is one of the best of the series: a classic naval adventure, crammed with incident, superbly plotted and utterly gripping...This is O'Brian at his brilliant, entertaining best and when he is on this form the rest of us who write of the Napoleonic conflict might as well give up and try a new career.

Fans of the series will need no encouragement to buy this book, but if you are new to Aubrey and Maturin then this is as splendid an introduction as you could wish for.' BERNARD CORNWELL