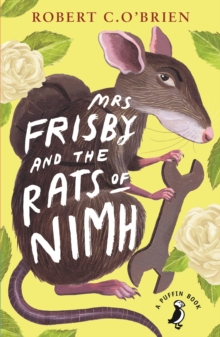 Mrs Frisby and the rats of NIMH

Mrs Frisby and the rats of NIMH

There are 20 titles to collect in the series, listed below, all with exciting new covers and fun-filled endnotes. A fabulous adventure for children by Robert C. O'Brien about super-intelligent rats. They are not like other rats. They work at night, in secret . . . Time is running out for Mrs Frisby. She must move her family of mice before the farmer destroys their home.

But her youngest son, Timothy, is too ill to survive the move.

Help comes in the unexpected form of a group of mysterious, super-intelligent rats.

But the rats are in danger too, and little by little Mrs Frisby discovers their extraordinary past . . . Robert C. O'Brien was, in private life, Robert Conly, senior assistant editor of National Geographic Magazine where he worked for over twenty years.

He wrote three books for children and one for adults and won the Newbery Medal for MRS FRISBY AND THE RATS OF NIMH, filmed as THE SECRETS OF NIMH.

Robert C. O'Brien died in 1973. Also available in A Puffin Book: GOODNIGHT MISTER TOM and BACK HOME by Michelle Magorian CHARLOTTE'S WEB, STUART LITTLE and THE TRUMPET OF THE SWAN by E.