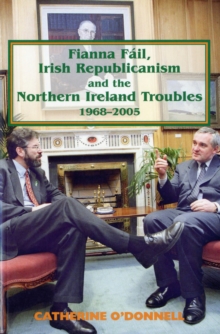 Fianna Fail, the Republican Party, has been defined by its emphasis on partition and its ideological commitment to reunification.

Through its use of anti-partitionist rhetoric it has been the most vociferous political party in the Republic of Ireland on Northern Ireland.

Its emotive and divisive response to the outbreak of the troubles in Northern Ireland was seen most clearly in the Arms Crisis of 1970 which threatened to destroy the party and the stability of the state in the Republic.

However, the party has also been at the centre of the Northern Ireland peace process, and the attempts at reconciliation between Unionists and Nationalists and North and South.

Yet there has been no substantive study of Fianna Fail's language, ideology and policy on Northern Ireland since the outbreak of the troubles.

How could 'The Republican Party' be such a central player in the political changes in Northern Ireland?

Has Fianna Fail changed its traditional republicanism and anti-partitionism?

This fascinating and important new book provides an examination of Fianna Fail's record on Northern Ireland since 1968. It outlines the party's response to the Troubles and its guiding principles in the search for the solution.

Catherine O'Donnell argues that the relationship between Fianna Fail and Sinn Fein is central to understanding Fianna Fail's role in the peace process, which began with the Fianna Fail-Sinn Fein talks in 1988.

As Sinn Fein make further electoral gains in the Republic of Ireland, this book will be essential reading for anyone wishing to understand how Republicanism is a contested electoral resource within southern politics.