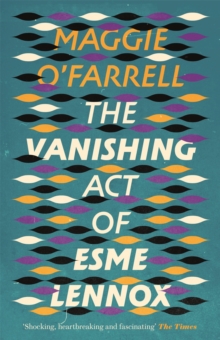 The vanishing act of Esme Lennox

A significant departure for Maggie O'Farrell in terms of maturity and style, the paperback publication of THE VANISHING ACT OF ESME LENNOX will be an unmissable event.

Set between the 1930s,and the present, Maggie O'Farrell's new novel is the story of Esme, a woman edited out of her family's history, and of the secrets that come to light when, sixty years later, she is released from care, and a young woman, Iris, discovers the great aunt she never knew she had.

The mystery that unfolds is the heartbreaking tale of two sisters in colonial India and 1930s Edinburgh - of the loneliness that binds them together and the rivalries that drive them apart, and lead one of them to a shocking betrayal - but above all it is the story of Esme, a fiercely intelligent, unconventional young woman, and of the terrible price she is made to pay for her family's unhappiness.

This is vintage Maggie O'Farrell: an impassioned, intense, haunting family drama - a stunning imagining of a life stolen, and reclaimed.