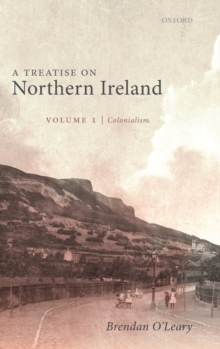 A treatise on Northern IrelandVolume 1,: Colonialism :

This brilliantly innovative synthesis of narrative and analysis illuminates how British colonialism shaped the formation and political cultures of what became Northern Ireland and the Irish Free State. A Treatise on Northern Ireland, Volume I provides a somber and compelling comparative audit of the scale of recent conflict in Northern Ireland and explains its historical origins.

Contrasting colonial and sectarianized accounts of modern Irish history, Brendan O'Leary shows that a judicious meld of these perspectives provides a properly political account of direct and indirect rule, and of administrative and settler colonialism. The British state incorporated Ulster and Ireland into a deeply unequal Union after four re-conquests over two centuries had successively defeated the Ulster Gaels, the Catholic Confederates, the Jacobites, and the United Irishmen-and theirrespective European allies.

Founded as a union of Protestants in Great Britain and Ireland, rather than of the British and the Irish nations, the colonial and sectarian Union was infamously punctured in the catastrophe of the Great Famine.

The subsequent mobilization of Irish nationalists and Ulsterunionists, and two republican insurrections amid the cataclysm and aftermath of World War I, brought the now partly democratized Union to an unexpected end, aside from a shrunken rump of British authority, baptized as Northern Ireland.

The failure of possible federal reconstructions of the Union and the fateful partition of the island are explained, and systematically compared with other British colonial partitions.

Northern Ireland was invented, in accordance with British interests, to resolve the 'hereditary animosities' between the descendants of Irish natives and British settlers in Ireland.

In the long run, the invention proved unfit for purpose.

Indispensable for explaining contemporary institutions and mentalities, this volume clears the path for the intelligent reader determined to understand contemporary Northern Ireland.