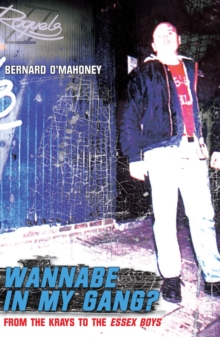 Wannabe in my gang?: from the Krays to the Essex boys

Kray gang boss Tony Lambrianou, who served a life sentence for the brutal murder of Jack 'the Hat' McVitie, has threatened to kill Bernard O'Mahoney 'by smashing a hammer through his head'. 'Dodgy' Dave Courtney, who claims to have murdered two gangland rivals, tried 'to put him out of his misery' and 'the most dangerous man in the country', John 'Gaffer' Rollinson, has vowed to kill him 'when he finds him'.

But O'Mahoney, one-time friend of the notorious Kray Brothers and former key member of the Essex Boys gang, isn't concerned about any of these threats, because he knows the truth about the wannabe gangsters who have built their 'reputations' on fantasy gleaned from Hollywood movies and 'true' crime books written by their heroes.

Wannabe in my Gang? is a story that spans two decades and involves some of the most infamous names and crimes in British history. It gives a unique insight into the Kray brothers' firm, revealing that its public image is far from the truth. Also uncovered is what happened to the remaining members of the Essex Boys firm following the death of Esctasy victim Leah Betts and the murder of three of its leaders, who were found dead in their blood-spattered Range Rover one winter's evening.

For the first time ever, O'Mahoney will expose the gangland myths that have made legends of those who claim to be responsible for mayhem and murder. He reveals the sordid secret of one of Britain's most infamous gangsters and tells the truth about the imposters who make a living selling stories and writing books about events that have never even happened.

Wannabe in my Gang? is the book that many in the underworld never wanted the public to read. A crime exposé of the highest order, it is shocking, revelatory and gripping from beginning to end.