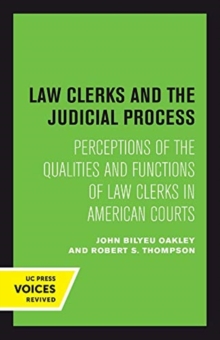 Law Clerks and the Judicial Process : Perceptions of the Qualities and Functions of Law Clerks in American Courts

This is the first in-depth empirical and historical study of the use of law clerks by American judges.

Although possessing a hundred-year heritage, the institution has been ignored as an important component of the process of judicial decision-making.

Law clerks are, in the authors' words, "subordinate, anonymous, but often quite powerful lawyers who function as the non-commissioned officers in the army of the judiciary." American courts are currently altering the traditional use of law clerks through the introduction of important innovations that enhance the ability of judges to dispose of cases rapidly but detract from personal judicial control over individual decisions.

The authors investigate the clash of tradition and innovation through interviews with sixty-three judges of federal courts and appellate courts in California.

They find distinctly different models of law clerk usage in the state and federal systems, which they analyze on the basis of the judges' own perceptions of the qualitative and quantitive impact on their decision of variations in the character, tenure, and duties of staff assistants.

They offer suggestions on how modern courts can cope with the "crisis of volume" without unduly sacrificing traditional standards of judicial autonomy. Because of the confidential nature of judicial deliberations, judges are rarely willing to discuss publicly their use of law clerks.

This study employs unconventional techniques for penetrating the secrecy of judicial chambers while respecting the confidentiality and the individuality of its sources.

It presents important new information on the internal operating procedures of the courts studies, collating interview data with facts abstracted from pre-existing but often obscure sources, and providing a particularly close look at the inner workings of the Supreme Court of California and the United States Court of Appeals for the Ninth Circuit.

Revealing the significance of public funding of judicial staff in determining patterns of law clerk usage, it should promote further investigation and debate regarding the proper structure and role of staff assistance in the judicial process.

This title is part of UC Press's Voices Revived program, which commemorates University of California Press's mission to seek out and cultivate the brightest minds and give them voice, reach, and impact.

This title was originally published in 1980.