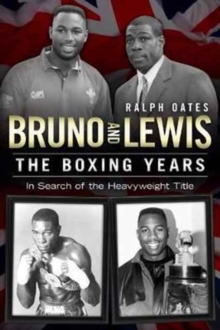 Bruno and Lewis : The Boxing Years

The only British-born boxer to have won the world heavyweight crown was Bob Fitzsimmons, who reigned from 1897-1899.

Since then, a host of challengers had attempted to duplicate Fitzsimmons' success and bring the championship back to British shores.

They were duly turned back by the defending title-holders, who were vastly superior in every department.

Many fans had come to the depressing conclusion that they would never see a Briton wear the crown in their lifetime.

When Frank Bruno emerged, followed later by Lennox Lewis, it appeared that Britain finally had two fighters who could compete with the elite in the division, succeed where others had failed, and win the big prize.

Bruno and Lewis: The Boxing Years gives an account on how these two fighters changed the global image of British heavyweights by their respective successes inside the square ring.

The road to the top was not always easy, and both men had to overcome setbacks along the way.

The pair eventually clashed in an exciting historical contest in 1993-a fight which pitted two Britons against each other to contest the world heavyweight crown for the first time.