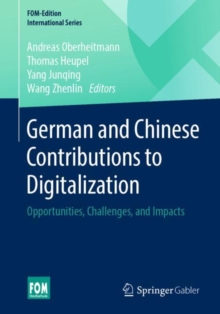 German and Chinese Contributions to Digitalization : Opportunities, Challenges, and Impacts

Part of the International Series series

Digitalization is one of the biggest challenges of the 21st Century.

In Germany, the concept of Industry 4.0 goes back to the high-tech strategy of the Federal Government and describes the interlocking of industrial production with the latest information and communication technology.

In the intelligent factory, intelligent and networked machines will operate, decide and optimize largely autonomously in cooperation with humans.

For China, the German concept Industry 4.0 is a strategic source of inspiration.

Among other things, it was a model for the current Chinese innovation and industrial policy strategy Made in China 2025.

This book is looking into different aspects of digitalization.

Part 1 presents the concept of Industry 4.0, both, from the German and the Chinese perspective.

Part 2 describes the Chinese innovation concept Made in China 2025 within different economic sectors in China and discusses to what extent Industry 4.0 might be considered its role model.

Part 3 presents the opportunities and challenges of digitalization and big data from a regional perspective.

Part 4 analyses the special aspect of the impacts of digitalization for the banking sector and international trade cooperation.