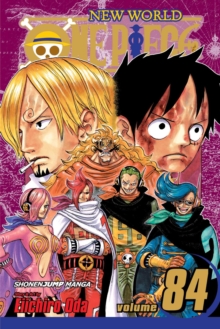 Part of the One Piece series

Join Monkey D. Luffy and his swashbuckling crew in their search for the ultimate treasure, the One Piece!

As a child, Monkey D. Luffy dreamed of becoming King of the Pirates. But his life changed when he accidentally gained the power to stretch like rubber...at the cost of never being able to swim again!

Years, later, Luffy sets off in search of the "One Piece," said to be the greatest treasure in the world... Thanks to some dirty tricks, the Vinsmokes have Sanji trapped.

Will he really be doomed to his fate as a pawn in a political marriage?!

Meanwhile, what will happen to Luffy and the gang as they fight against some of Big Mom's strongest officers? * The latest volume of the world's best-selling manga! * Releases 4 times a year for 84+ volumes. Series is ongoing. * The best-selling manga in the world with over 400 million copies in print. * Weekly simultaneous serialization in VIZ Media's Weekly Shonen Jump digital magazine. * Anime broadcast on Cartoon Network; streaming available on Viz.com, FUNimation.com, Hulu.com, Onepieceofficial.com.