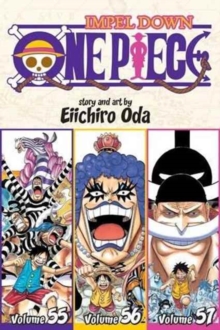 Part of the One Piece (Omnibus Edition) series

As a child, Monkey D. Luffy dreamed of becoming King of the Pirates. But his life changed when he accidentally ate the Gum-Gum Fruit, an enchanted Devil Fruit that gave him the ability to stretch like rubber.

Its only drawback? He'll never be able to swim again--a serious handicap for an aspiring sea dog!

Years later, Luffy sets off on his quest to find the "One Piece," said to be the greatest treasure in the world.

Luffy's brother, the infamous pirate Portgaz D. Ace, is being held at Impel Down prison...and he's scheduled for the chopping block!

While breaking into the daunting underwater dungeon to rescue his next of kin, Luffy encounters former enemy Buggy the Clown and the toxically terrible Warden Magellan.

Before long, what started as a prison break turns into all-out war with the World Government!