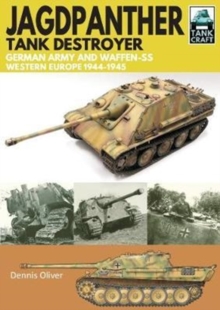 Combining the destructive firepower of the 88mm gun with the outstanding mobility of the Panther series, the Jagdpanther is quite probably the best-known tank destroyer of the Second World War.

In the vehicle's first action on 30 July 1944, three Jagdpanthers managed to destroy eleven British tanks in a vicious two minute firefight near the village of Les Loges in Normandy, cementing the Jagdpanther's reputation as a potent tank killer.

In his fifth book in the TankCraft series, Dennis Oliver uses contemporary photographs and meticulously researched, superbly presented colour and monochrome illustrations to tell the story of these heavy self-propelled anti-tank guns and the units which operated them in the German defence of the Western Front.

As with all the books in the TankCraft series, a large part of this work showcases available model kits and aftermarket products, complemented by a gallery of expertly constructed and painted models.

Technical details as well as modifications introduced during production and in the field are also explained giving the modeller all the information and knowledge required.