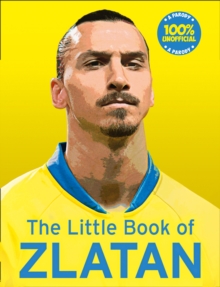 The little book of zlatan

The Little Book of Zlatan is a celebration of one of the most charismatic, mercurial and talismanic footballers in the game, an individual so distinct, so talented and so perfect that he must refer to himself in the third person at all times. Throughout history, there have been many, many truly outstanding sportsmen and women.

These are the individuals that have pushed the boundaries of their sport, set incredible new records or driven the human body to its physiological limits.

Every day we celebrate the feats of the fastest, strongest and most brilliantly technical athletes on the planet. However, if we interrogate that history further, there are some individuals that stand head and shoulders above the others, modern day heroes who can be attributed with the status of 'icon' or 'legend' - and who are consequently bequeathed a peerless position in society.

These individuals are not only differentiated by their awe-inspiring dominance of their own sport, but by the way in which we - the normal folk - reflect upon their contribution and indeed their cultural legacy. What makes Muhammad Ali, Ayrton Senna, Usain Bolt and Maradona the greatest of all time?

Is it the success they achieved or the way in which they achieved it? The answer - perhaps reassuringly in an era of big data, football academies, sports science and media training - lies in the cult of personality.

Zlatan is an icon not just because of his extraordinary records on the field, but because his personality has never had to take a back seat on the journey.

Let's be honest, which other footballer would say - with an entirely straight face: "One thing is for sure.

A World Cup without Zlatan is nothing." There is only one Zlatan Ibrahimovic.