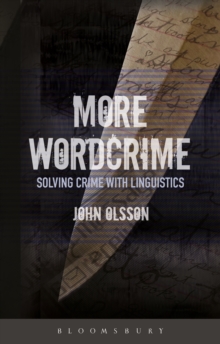 Murders, cover-ups, infidelities, financial and political skulduggery: Dr. John Olsson has seen it all in his decades as one of the world's top forensic linguists specialising in authorship. Working on cases that range from accusations of genocide to domestic disputes gone bad to allegations of university plagiarism, Olsson turns the same tools to the task - the power, depth and precision of forensic linguistics.

Grammatical curiosities, lexical quirks, typographic stylings and patterns of use can all give away even the most hard-bitten and careful of criminals. And Olsson doesn't stop there. From the giveaway compound nouns of heavy-handed police statements to the startling similarities displayed in what should be individual office accounts, officials in high places are given a run for their money too.

In approachable and clear prose, Dr Olsson details how forensic linguistics helps the law beat criminals, and how even those in power can be held to account. This is fascinating reading for anyone interested in true crime, in modern, cutting-edge criminology and also where the study of language meets the law.