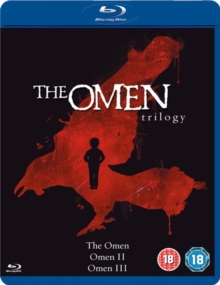 The saga begins with 'The Omen' (1976), when US Ambassador Robert Thorn (Gregory Peck) is persuaded to substitute a newborn baby, whose mother has died in childbirth, for his own stillborn son.

By the age of five, the child, Damien (Harvey Stephens), seems to be exerting a malevolent influence on the Thorn household, suffering a violent fit when he is taken to church and causing his nanny to hang herself.

Thorn searches for an answer to his son's behaviour and meets maverick priest Father Brennan (Patrick Troughton), who tries to convince him that Damien is in fact the Antichrist and must be stopped at all costs.

The Ambassador at first dismisses this as the crazy rantings of a religious maniac, but subsequent events suggest that maybe the priest had a point.

The second film, 'Damien - Omen 2' (1978), picks up events a few years later, with the now-orphaned Damien (Jonathan Scott-Taylor) turning 13 and living with his adoring aunt and uncle.

Aunt Marion (Lee Grant) is the first to suspect there is more to the young devil than adolescent angst, leading to her swift dispatch by a killer raven.

As for Damien, he is making his mark at military school, and is dismayed to discover his true demonic identity - but not for long.

The third film, 'Omen 3 - The Final Conflict' (1981), finds Damien (Sam Neill) all grown up and heading a multinational company.

He is about to be appointed US Ambassador to England, a position which will enable him to take over the world and thus fulfil the terrible forecasts of scripture.

But there is opposition in the form of a bunch of monks with sacred daggers who will do everything necessary to prevent Satan's enthronement.