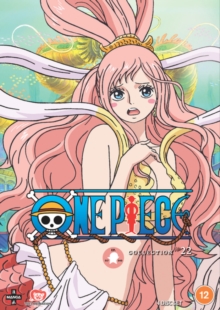 Episodes 517-540 of the Japanese anime that follows the adventures of a boy who sets out to become a pirate.

Like many others before him, Monkey D. Luffy (voice of Mayumi Tanaka) is obsessed by the tale of the treasure horde called One Piece, reputedly buried by the Pirate King Gol D.

Roger before his execution. Armed with only his irrepressible nature, Luffy sets out to become a pirate in the dangerous waters of the Grand Line, and it isn't long before he has his own crew of ruffians, a ship and a navy fleet on his trail as he searches for the treasure that will crown him the new king of the pirates.

The episodes are: 'The Beginning of the New Chapter!

The Straw Hats Reunited!', 'An Explosive Situation! Luffy Vs Fake Luffy!', 'The Navy Has Set Out! The Straw Hats in Danger!', 'Big Guns Assembled! The Danger of the Fake Straw Hats!', 'The Battle Is On!

Show Them What You Got from Training!', 'Everyone Together!

Luffy, Setting Out for the New World!', 'A Surprising Fact!

The Man Who Guarded the Sunny!', 'Deadly Combat Under the Sea!

The Demon of the Ocean Strikes!', 'Lost in the Deep Sea!

Beautiful Mermaids!', 'Excitement Blow-Out! Sanji's Life Under Threat!', 'The Fish-Man Will Be Annihilated?!

Sharley's Prophecy!', 'The King of the Fish-Man Island!

Neptune, the God of the Sea!', 'Ryugu Palace! Taken By the Shark That They Saved!', 'A Coward and a Crybaby!

The Princess in the Hard Shell Tower!', 'It's an Emergency!

The Kidnapping of Shirahoshi', 'Hordy's Onslaught! The Retaliatory Plan Set Into Motion!', 'The Battle in the Ryugu Palace!

Nami and the Fish-Man Pirates!' and 'A Hero Who Freed the Slaves!