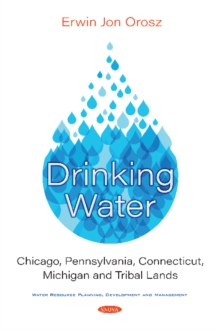 By: Orosz, Erwin Jon(Edited by)

The U.S. Geological Survey (USGS) Environmental Health Mission Area (EHMA) is providing comprehensive science on sources, movement, and transformation of contaminants and pathogens in watershed and aquifer drinking-water supplies and in built water and wastewater infrastructure in the Greater Chicago Area.

The focus of chapter 1 is on assessing point-of-use (tapwater) drinking-water exposure pathways for a broad range of potential environmental contaminants and exploring infrastructure-related factors that could alter or transform chemical constituents or microbial communities in drinking water (such as treatment plant technology, distribution system characteristics, private plumbing components, and point-of-use treatment) Pennsylvania has the second highest number of residential wells of any state in the Nation with approximately 2.4 million residents that depend on groundwater for their domestic water supply.

The groundwater used for domestic water supply in Bradford County is obtained primarily from shallow bedrock and from unconsolidated (glacial) deposits that overlie the bedrock.

As reported in chapter 2, data for 72 domestic wells were collected and analyzed for a wide range of constituents that could be evaluated in relation to drinking water health standards, geology, land use, and other environmental factors.

The occurrence of arsenic and uranium in groundwater at concentrations that exceed drinking-water standards is a concern because of the potential adverse effects on human health.

The Connecticut Department of Public Health reported that there are about 322,600 private wells in Connecticut.

The State does not require that existing private wells be routinely tested for arsenic, uranium, or other contaminants.

The U.S. Geological Survey (USGS) completed an assessment in 2016 on the distribution of concentrations of arsenic and uranium in groundwater from bedrock in Connecticut.

Chapter 3 presents the major findings for arsenic and uranium concentrations from water samples collected from 2013 to 2015 from private wells.

The circumstances and response to Flint's drinking water contamination involved implementation and oversight lapses at the EPA, the state of Michigan, the Michigan Department of Environmental Quality (MDEQ), and the city of Flint.