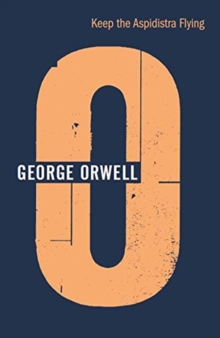 Part of the The complete works of George Orwell ; 4 series

Volume 4 of The Complete Works of George OrwellOriginally published in 1936, before Orwell achieved fame, Keep the Aspidistra Flying takes Money as its theme.

Gordon Comstock gives up a good job in an advertising agency to become a part-time bookshop assistant at a meagre wage, thereby gaining leisure for writing.

However, after some modest success in the world of letters he eventually slides into the abyss, to be rescued by the faithful Rosemary. Ironically, Gordon's voyage of discovery leads him back to commercial security, marriage, and the unexpected pleasures of domesticity.

But above all he learns of the courage of keeping up appearances despite hardships.

The symbol of this is the potted aspidistra: the ugly, stubborn, organic emblem of social and biological survival. This new edition restores most of the material censored on first publication due to fears of action for libel, defamation and obscenity.

Of particular interest are the previously suppressed advertising slogans of the 1930s and, in light of the censorship he experienced, Orwell's ironic choice of surname for Gordon: Comstock.