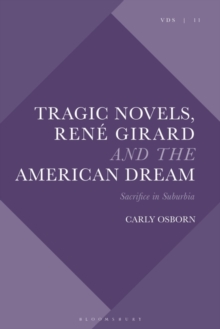 Part of the Violence, Desire, and the Sacred series

This book draws on the philosopher Rene Girard to argue that three twentieth-century American novels (Jeffrey Eugenides's The Virgin Suicides, Rick Moody's The Ice Storm, and Richard Yates's Revolutionary Road) are tragedies. Until now, Girardian literary analysis has generally focused on representations of human desire in texts, and neglected both other emotions and the place of tragedy.

Carly Osborn addresses these omissions by using Girardian theory to present evidence that novels can indeed be tragedies.

The book advances the scholarship of tragedy that has run from Aristotle to Nietzsche to Terry Eagleton, proposing a new way to read modern novels through ancient traditions.

In addition, this is the first work to examine the place of women as victims, or in Girardian terms, 'scapegoats', in twentieth century fiction, specifically by considering the representation of women's bodies and ambivalence about their identities. In deploying a rich and vivid array of tragic tropes, The Virgin Suicides, The Ice Storm, and Revolutionary Road participate in a deep-rooted American tragic tradition.

Tragic Novels, the American Dream and Rene Girard will be of interest to those working at the intersection of philosophy and literature, as well as Girard specialists.