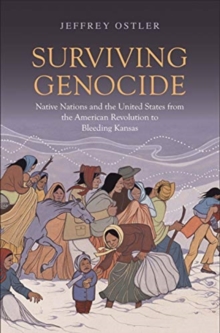 Surviving Genocide : Native Nations and the United States from the American Revolution to Bleeding Kansas

"Intense and well-researched, . . . ambitious, . . . magisterial. . . . Surviving Genocide sets a bar from which subsequent scholarship and teaching cannot retreat."-Peter Nabokov, New York Review of Books In this book, the first part of a sweeping two-volume history, Jeffrey Ostler investigates how American democracy relied on Indian dispossession and the federally sanctioned use of force to remove or slaughter Indians in the way of U.S. expansion. He charts the losses that Indians suffered from relentless violence and upheaval and the attendant effects of disease, deprivation, and exposure.

This volume centers on the eastern United States from the 1750s to the start of the Civil War. An authoritative contribution to the history of the United States' violent path toward building a continental empire, this ambitious and well-researched book deepens our understanding of the seizure of Indigenous lands, including the use of treaties to create the appearance of Native consent to dispossession.

Ostler also documents the resilience of Native people, showing how they survived genocide by creating alliances, defending their towns, and rebuilding their communities.