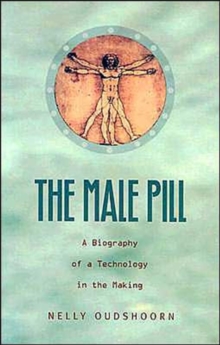 The male pill : a biography of a technology in the making

"The Male Pill" is the first book to reveal the history of hormonal contraceptives for men.

Nelly Oudshoorn explains why it is that, although the technical feasibility of male contraceptives was demonstrated as early as the late 1970s, there is, to date, no male pill.

Ever since the idea of hormonal contraceptives for men was introduced, Oudshoorn stresses, scientists, feminists, journalists, and pharmaceutical entrepreneurs have questioned whether men and women would accept a new male contraceptive if one were available.

Providing a richly detailed examination of the cultural, policy, and scientific work around the male pill from the 1960s through the 1990s, she advances work at the intersection of gender studies and the sociology of technology.

Oudshoorn emphasizes that the introduction of contraceptives for men depends to a great extent on changing ideas about reproductive responsibility. Initial interest in the male pill, she shows, came from outside the scientific community: from the governments of China and India, which were interested in population control, and from Western feminists, who wanted the responsibilities and health risks associated with contraception shared more equally between the sexes.

She documents how in the 1970s, the World Health Organization took the lead in investigating male contraceptives by coordinating an unprecedented, worldwide research network.

She chronicles how the search for a male pill required significant reorganization of drug-testing standards and protocols and of the family-planning infrastructure - including founding special clinics for men, creating separate spaces for men within existing clinics, enrolling new professionals, and defining new categories of patients. "The Male Pill" is ultimately a story as much about the design of masculinities in the last decades of the twentieth-century as it is about the development of safe and effective technologies.