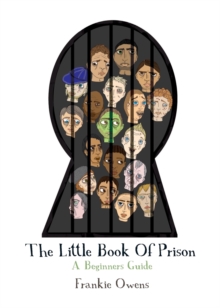 The little book of prison : a beginner's guide

An easy-to-read prison survival guide of do's and don'ts.

Perfect for anyone facing trial for an offence that may lead to imprisonment, their families and friends.

Packed with humour as well as more serious items. Backed by prisoner support organizations. Straightforward and highly entertaining. Frankie started writing the LBP from day two of entering prison as a first-time offender.

He had no idea how the system or a prison worked. He was clueless about it all and it was hard for him going in and frightening for the family and loved ones he left behind.

The writing began as self-help and as the days progressed it occurred to Frankie that the LBP would prove useful to first-time offenders as well as other prisoners and help them get through what is surely one of the most difficult times in their lives.

It also motivated him to get out on the prison wing and find out as much as possible about his new home.

There are a lot of books about people in prison, people in far worse places than Frankie was and on far longer sentences.

But the LBP is a book about prison not people, and will help new inmates, their friends and families get to know what to expect from the system. The LBP is a masterpiece in comic writing but somehow gets through to people with serious information in a way that more formal texts cannot.

Already organizations connected to the criminal justice system are beginning to acknowledge that Frankie Owen's LBP is an ideal read for people facing the trauma of a first prison sentence.

It will also be of considerable interest to other prisoners or people working in a custodial setting. "If people want to know what prison is like it's for them, if people need to know what happens in prison it's definitely for them". 'By the end of the book, I felt like Frankie Owens was my cell-mate.

His style and execution is either perversely skilful or an absolute fluke, but whatever it is, it is certainly good': Prison Service Journal. 'Absolutely hilarious, I'm not sure it'll ever be standard prison issue but maybe it should be!

Packed full of witty and wry observations and some extremely pertinent advice.

It is well-structured, easy to read and informative. I hope he continues writing as The Little Book of Prison is something that the general public would love to read as well as a guide book for other prisoners': Koestler Award Judges 'Funny and educational, in a tongue in cheek kind of way, and has a much wider appeal than you might think': thebookbag.co.uk Frankie Owens was prisoner A1443CA at Her Majesty's pleasure until 2 August 2011.

If he had been given the information gathered in LBP, he thinks that the first weeks inside would have been better and the learning curve not as steep.