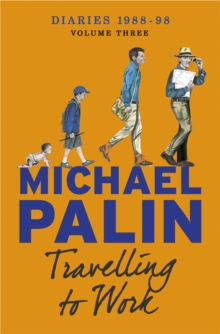 The third volume of Michael Palin's celebrated diaries. TRAVELLING TO WORK is a roller-coaster ride driven by the Palin hallmarks of curiosity and sense of adventure.

Michael was not the BBC's first choice for the travel series AROUND THE WORLD IN 80 DAYS, but after its success, the public naturally wanted more.

Palin, however, had other plans. There was his film AMERICAN FRIENDS, a role in Alan Bleasdale's award-winning drama GBH, the staging of his West End play THE WEEKEND, a first novel, HEMINGWAY'S CHAIR, and a lead role in FIERCE CREATURES.

He did find time for two more travel series, POLE TO POLE in 1991 and FULL CIRCLE in 1996, and wrote two bestselling books to accompany them.

These ten years in different directions offer riches on every page.