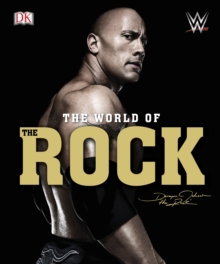 The world of The Rock

Celebrate the impressive career of Dwayne "The Rock" Johnson with this comprehensive visual guide, which chronicles every step from his explosive WWE debut match to his full-blown Superstar status.

Dubbed "The Great One," for more than 20 years The Rock has delighted millions of fans with his charisma, catchphrases and championship wins - all captured in this stunning book.

Discover The Rock's fascinating family history as the first third-generation WWE Superstar; his training and early years in the ring; his epic wins and greatest moments as The People's Champion; and his impressive movie career including his appearances in The Scorpion King, The Mummy Returns and the Fast and Furious franchise.

A must-have for any WWE fan, The World of The Rock reveals the whole story behind "The Most Electrifying Man in Sports Entertainment", both in and out of the ring. TM & (c) 2018 WWE. All Rights Reserved.