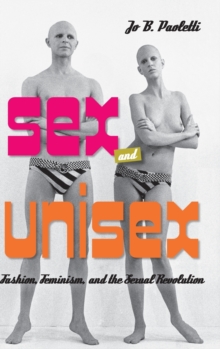 Sex and unisex : fashion, feminism, and the sexual revolution

Notorious as much for its fashion as for its music, the 1960s and 1970s produced provocative fashion trends that reflected the rising wave of gender politics and the sexual revolution.

In an era when gender stereotypes were questioned and dismantled, and when the feminist and gay rights movements were gaining momentum and a voice, the fashion industry responded in kind.

Designers from Paris to Hollywood imagined a future of equality and androgyny.

The unisex movement affected all ages, with adult fashions trickling down to school-aged children and clothing for infants.

Between 1965 and 1975, girls and women began wearing pants to school; boys enjoyed a brief "peacock revolution," sporting bold colors and patterns; and legal battles were fought over hair style and length.

However, with the advent of Diane Von Furstenberg's wrap dress and the launch of Victoria's Secret, by the mid-1980s, unisex styles were nearly completely abandoned.

Jo B. Paoletti traces the trajectory of unisex fashion against the backdrop of the popular issues of the day-from contraception access to girls' participation in sports.

Combing mass-market catalogs, newspaper and magazine articles, cartoons, and trade publications for signs of the fashion debates, Paoletti provides a multigenerational study of the "white space" between (or beyond) masculine and feminine.