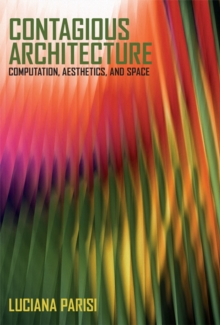 Contagious architecture : for an aesthetic computation of space

Part of the Technologies of lived abstraction series

A proposal that algorithms are not simply instructions to be performed but thinking entities that construct digital spatio-temporalities. In Contagious Architecture, Luciana Parisi offers a philosophical inquiry into the status of the algorithm in architectural and interaction design.

Her thesis is that algorithmic computation is not simply an abstract mathematical tool but constitutes a mode of thought in its own right, in that its operation extends into forms of abstraction that lie beyond direct human cognition and control.

These include modes of infinity, contingency, and indeterminacy, as well as incomputable quantities underlying the iterative process of algorithmic processing.

The main philosophical source for the project is Alfred North Whitehead, whose process philosophy is specifically designed to provide a vocabulary for "modes of thought" exhibiting various degrees of autonomy from human agency even as they are mobilized by it. Because algorithmic processing lies at the heart of the design practices now reshaping our world-from the physical spaces of our built environment to the networked spaces of digital culture-the nature of algorithmic thought is a topic of pressing importance that reraises questions of control and, ultimately, power.

Contagious Architecture revisits cybernetic theories of control and information theory's notion of the incomputable in light of this rethinking of the role of algorithmic thought.

Informed by recent debates in political and cultural theory around the changing landscape of power, it links the nature of abstraction to a new theory of power adequate to the complexities of the digital world.