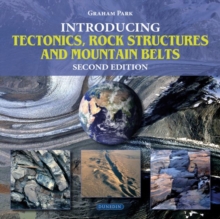 Introducing Tectonics, Rock Structures and Mountain Belts is written to explain the key concepts of tectonics and rock structures to students and to the interested non-specialist, especially those without a strong mathematical background.

The study and understanding of geological structures has traditionally been guided by the rigorous application of mathematics and physics but, in this book, Graham Park has avoided mathematical equations altogether and has reduced the geometry to the minimum necessary.

The application of plate tectonic theory has revolutionised structural geology by giving the study of rock structures a context in which they can be explained.

Since the large-scale movements of the plates ultimately control smaller-scale structures, the study of tectonics is the key to understanding the latter.

The reader is thus introduced to large-scale Earth structure and the theory of plate tectonics before dealing with geological structures such as faults and folds.

Studies by structural geologists of the movement history of rock masses relative to each other, as revealed by the study of fault systems and shear zones, has helped to integrate rock structures with plate tectonics and this has been emphasised in the book.

One of the most exciting aspects of geology is the study of the great mountain ranges, orogenic belts.

The final three chapters of the book explain how knowledge of plate tectonic theory, geological structures and the processes of deformation may be employed to understand these orogenic belts. hilst excessive use of terminology is avoided, all technical terms are in a Glossary and, as with all books in this series, the text is illustrated profusely.