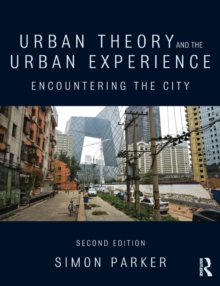 Urban theory and the urban experience : encountering the city

Urban Theory and the Urban Experience brings together classic and contemporary approaches to urban research in order to reveal the intellectual origins of urban studies and the often unacknowledged debt that empirical and theoretical perspectives on the city owe one another. From the foundations of modern urban theory in the work of Weber, Simmel, Benjamin and Lefebbvre to the writings of contemporary urban theorists such as David Harvey and Manuel Castells and the Los Angeles school of urbanism, Urban Theory and the Urban Experience traces the key developments in the idea of the city over more than a century.

Individual chapters explore investigative studies of the great metropolis from Charles Booth to the contemporary urban research of William J.

Wilson, along with alternative approaches to the industrial city, ranging from the Garden City Movement to `the new urbanism'. The volume also considers the impact of new information and communication technologies, and the growing trend towards disaggregated urban networks, all of which raise important questions about viability and physical and social identity of the conventional townscape.

Urban Theory and the Urban Experience concludes with a rallying cry for a more holistic and integrated approach to the urban question in theory and in practice if the rich potent. For the benefit of students and tutors, frequent question points encourage exploration of key themes, and annotated further readings provide follow-up sources for the issues raised in each chapter.

The book will be of interest to students, scholars, practitioners and all those who wish to learn more about why the urban has become the dominant social, economic and cultural form of the twenty-first century