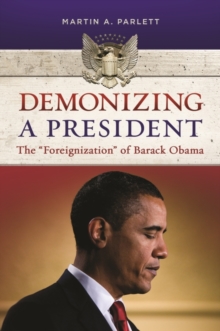 Demonizing a president : the "foreignization" of Barack Obama

By: Parlett, Martin A.

This groundbreaking political expose scrutinizes the motivations behind the unparalleled attacks on President Barack Obama that attempt to undermine his eligibility to lead the country. The ascendancy of the first African American president was a watershed moment in American history.

In response, President Obama's adversaries have engaged in relentless and systematic mudslinging throughout his campaign and well into his presidency, "othering" him as a foreign and dangerous political figure.

Never before has a presidential candidate been so maligned, by so many, in such a variety of ways-and yet won.

This provocative study investigates the unrest behind the Obama campaign and election, and the controversial political machine that causes it. Martin A. Parlett, himself a former campaigner for Barack Obama, examines the role identity politics and racialization play in the anti-Obama movement, shows how foreignization is the latest tool for political dissent, and discusses the ways in which the president has successfully utilized the "outsider" label to his own advantage.

Additionally, chapters trace political marginalization and race throughout history from slavery to Reconstruction to the Civil Rights Movement, concluding with the culture of distrust in the American political psyche since the events of September 11, 2001. Analyzes the tactics used by political adversaries to undermine the presidencyConsiders the mass of literature and filmography which proliferates narratives of the president's foreignization and offers a counter-positionExamines the rhetorical frames and motivations of Obama's foreignizationProvides insight into the motivations surrounding Obama-era conspiracy theories, such as the Birther movementUnderlines the post-20th century emergence and maintenance of an increasingly polarized electoral climate